Angel Barracks just came out with some great new 6mm figures. I have a bunch of their buildings I use for Future War Commander and OGRE.  These are definitely on the list to pick up...
Angel Barrack’s 6mm Civilians:


A number of years ago, I started collecting World War Two for large platoon and company sized actions. The collection tapered off as I became daunted by the sheer numbers of troops and to a lesser extent vehicles needed as I seemed unable to find just one unit, year, or even theater on which to focus. I also was unwilling to just play World War Two.

Over the years, I painted various sets. One of the last was a a number of 82nd and 101st Airborne troops (the All Americans and Screaming Eagles respectively). I planned to play some Normandy skirmishes but stalled at the prospect of building proper bocage.

Recently, I reactivated World War Two. I determined the best way to collect the period was through mini- campaigns; thus, I have collected a number of Scenario books from Too Fat Lardies, Skirmish Campaigns and
the like in various theaters. Then, I organized what I had completed into discrete sets linked to various scenarios. Naturally, some of the troops and vehicles will be able to do double duty

The next step was to enlist some help in the painting. Now, progress continues. Buildings are collected and completed. Terrain is in good shape. Heck, I even located Horsa and Waco gliders, not to mention a multi-scale version of Pegasus Bridge...

Finally, I deemed the best way to play the period was use Memoir ’44 with my 6mm for battles and 15mm for the Platoon to Company level actions using I Ain't Been Shot Mum and Troops, Weapons and Tactics. I even have an odd 28mm for some true skirmish games.

Matt’s Painting of various units continues. I can expect the final installment soon. 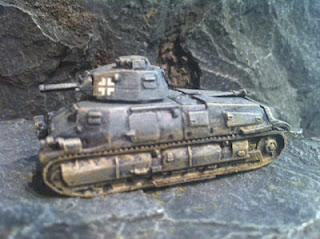 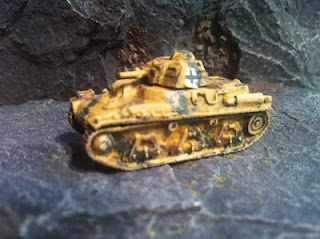 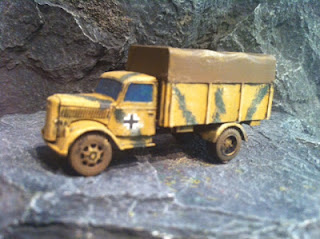 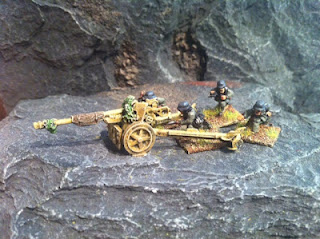 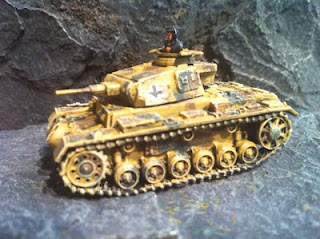 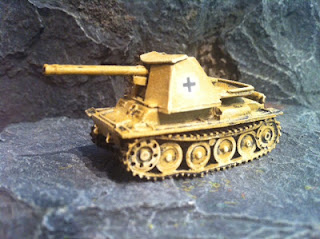 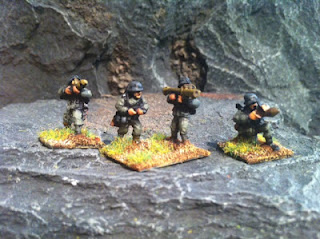 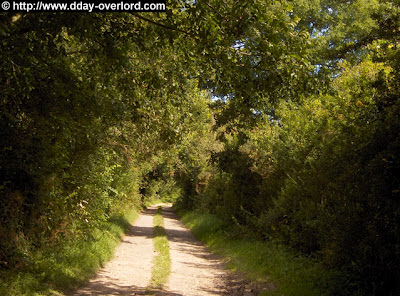 Stay tuned here. I expect the period to take off as I am organizing a trip to Normandy for next spring...
Posted by Mark Ryan at 10:12 AM No comments: 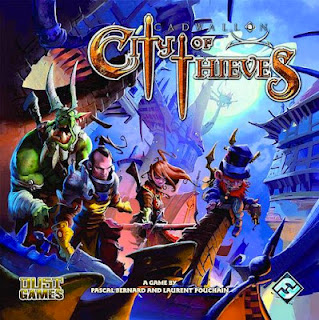 Remember Rackham? That French company with the crazy, stylized beautiful anime/fantasy sculpts. Well they created a universe that has spawned RPG’s. Confrontation, miniatures and a boardgame Cadwallon: City of Thieves.

The game occurs in Cadwallon, an unaligned free city in the midst of a world tearing itself apart.

Each player controls a rival gang of thieves, vying for control of a district of Cadwallon. Actions involve stealth, robbery, thuggery and combat. Eight different scenarios are included in the base game. There are a number of free online scenarios and add-ons.

Set up begins with the players choosing a scenario. The Thieves guild also assigns minor missions which involve targeting various items. Two militiamen are placed on the board. Treasure tokens are randomly seeded.

Each player chooses a gang of 4 characters. The gang members have a stats card dictating their Combat, Movement, Mind values and a unique special ability. Weirdly, each has the same statistics but at least the special abilities are different.

The game is easy to learn. Time is limited, though so many of the actions are smash and grab instead of complex schemes.

The figures are very interesting and look fun to paint. The style is unique, though, so I don’t expect to be mixing them into my collection.

Here are some photos I found on Boardgame Geek. I'll be painting mine in a similar fashion. 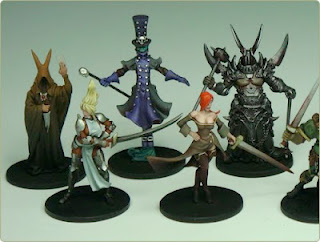 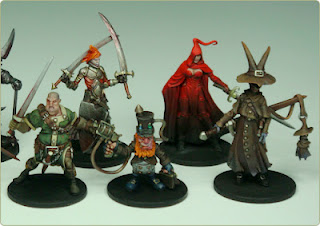 My first experimental game was good. We’ll see how it turns out in the long run. But, for $30 you can’t beat it. I suspect I’ll get at least six hours of play from it. Besides, the theme was one I always wanted to try back when I had a thief in D&D...
Posted by Mark Ryan at 9:57 AM No comments:

Email ThisBlogThis!Share to TwitterShare to FacebookShare to Pinterest
Labels: Cadwallon, City of Thieves

Matt of Glenbrook Games has also promised some necessary Mid-Late War Germans. They will see action as Luftlande versus the All Americans. 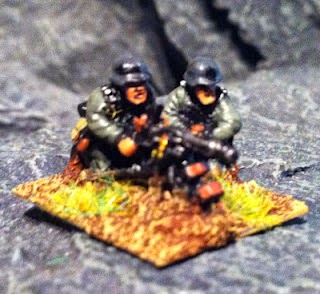 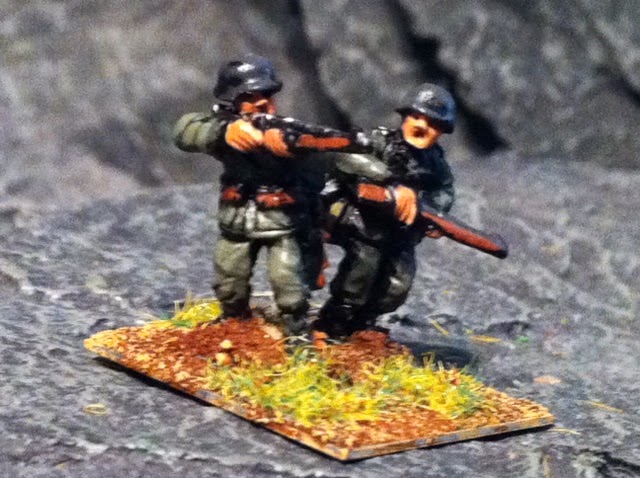 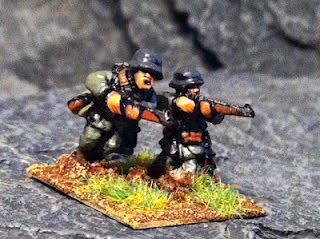 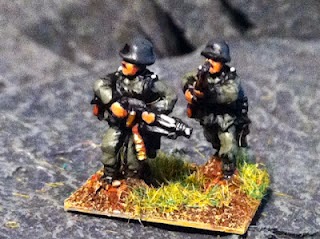 
Stan announced he is sending along some more Infinity starter sets. These were gifts from my kids for my birthday, so how could I not have them painted? An no it's not a new period (SciFi skirmish is one of my oldest collections only trumped by ACW, Late Medieval/Renaissance, SCW SYW/F&I, Samurai and WW2, in that order). And no, you can't have them as they are not getting culled. Here's some snaps:

Ariadne is the faction at the top; Yu Jinn is the bottom. The former are lost colonists from a variety of places that dropped out of Warp/HyperSpace/whatever and colonized some worlds to be found later as Earth expanded out; this groups is of Scottish descent, hence the kilts and claymores. The Yu Jinn are this version of Animes' Greater East Asia Co-Prosperity Sphere but headed by the Chinese.  That makes three factions complete (Mercs, Scots and ChiComs)...short of adding a medic, maybe a heavy suit and some heavy weapon or bot, the factions are probably complete for me. The system gives a good game with three to eight figures. It bogs down with more.
Posted by Mark Ryan at 11:03 AM No comments:

Check out this Blog for some excellent John Carter of Mars wargaming.   The figures are Black Hat, Peter Pig and some Golden Compass pieces with tons of excellent scratch built terrain.

http://martianwarlords.blogspot.com/2012/05/out-of-desert-hoodin.html
Posted by Mark Ryan at 7:56 PM No comments:

Check out these figures for Old Glory UK.  The have a new Alouette with parts that makes it possible to build either a KCar or a GCar. 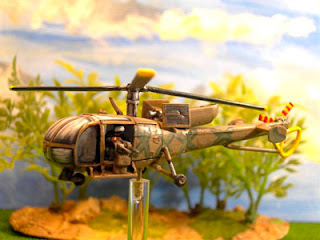 They also do a pack of Rhodesian infantry. 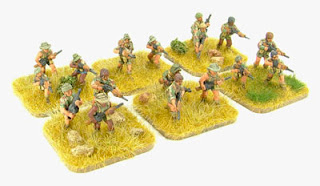 Once I finish one of my small projects, I suspect I will be revisiting my Modern Africa to add some Rhodesians. It is in interesting period, not to mention you can always play some AK47 and use them as Professionals...it's been a while since the fighting flared up in Zoswete.  I think MOFO with some professionals may be ready to take on ZITFACE and CRAP.

Oh and don't believe everything that is written in the Zoswete Rag...it' controlled by Genral Faht Chanse.
http://zoswete.blogspot.com/
Posted by Mark Ryan at 11:45 AM No comments:

Good duel video!
Duel at Blood Creek
Posted by Mark Ryan at 11:57 AM No comments: