I have been engaged in an ongoing correspondence with Richard Clewer of Magister Militum about the 15mm French Revolution miniature line. It seems that he has added a few new units to the French (cavalry and limbers, caissons and wagons). In addition, he will be adding limbers, caissons & wagons for the Austrians and Prussians. Over the next year it is his goal to add more or update the collections over the next year. The additions will also be occurring in the later napoleonic collections. The Revolutionary era (1794-1802) additions are great news to me as I hope to continue to complete more of my ever growing collection. I forgot to ask when the additions will appear on the website, but I know some are already available to order...he is also considering adding British and Russians.
Here's the link to the collection: (http://www.magistermilitum.com/prodtype.asp?PT_ID=374&strPageHistory=cat).
Posted by Mark Ryan at 7:30 AM No comments:

Deadlands Monsters and Iron Dragon on the way... 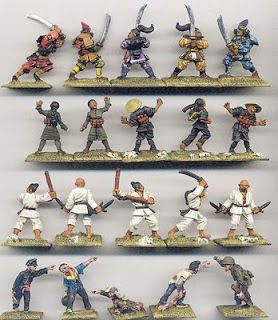 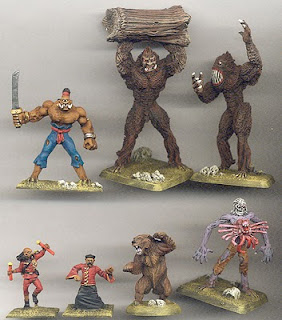 Stan Johanesen continues to work away on my Deadlands stuff. The figures are mostly from the Iron Dragon contingent, a quasi-Chinese Japanese railroad Completed are the wizard, the demolitionist, five Samurai, five sappers, and five martial artists. I would like to find a pack of Seven (could it be THE Seven) Samurai as they are a named force as a hero contingent.and some rank and file that match the style. The bummer on this line is the manufacturer is truly UNDEPENDABLE. It took me almost a year to get the line 95% completed and a return of the money for the three items he never could seem to ship. Only buy the Deadlands stuff in the here-and-now...
Monsters: There were several monsters in the pack: an oriental Ogre (hardly the Japanese one of mythology and rather more of a Greco-Japanese hybrid), a Sasquatch, a Wendigo, a Grizzly and a Hunger Spirit (I think).
There also was a pack of Atomic Cafe zombies in the box...enjoy the pictures:
Posted by Mark Ryan at 10:12 AM No comments: 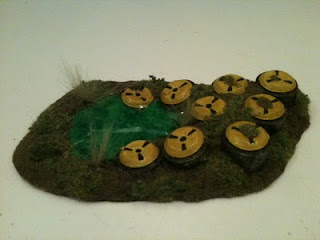