My buddy Bret came over on Saturday. A long time fan of the cyberpunk genre, he convinced me to play the first scenario. I was a bit uncertain as the figures are not finished but definitely wargame standard finished. I also have plans to base them on the clear acrylic bases...Bret was persuasive. We rolled out the first scenario which is the start of the eighteen game campaign.

Harvey Scott, muscle and the hacker Tomo Kosuda of the Ubermensch gang were hired for a mission of industrial espionage against the Nakamura Corporation. The scenario starts when they infiltrate into a secret lab complex deep within the Nakamura Tower. They had been tasked with hacking and inserting an experimental virus into the Intranet of the building. Tomo tried to hack in remotely but was unable. The game starts when the two have located a schematics and location of a server tower where Tomo can jack directly into the system and upload the virus.

Turn One:
Tomo slipped down the corridor masking his presence with a commercial level "Ninja"neural chip. As Harvey stepped into the hall way, security drones engaged. Harvey avoided gunfire and prepared to engage with an AMM Needle Knife. 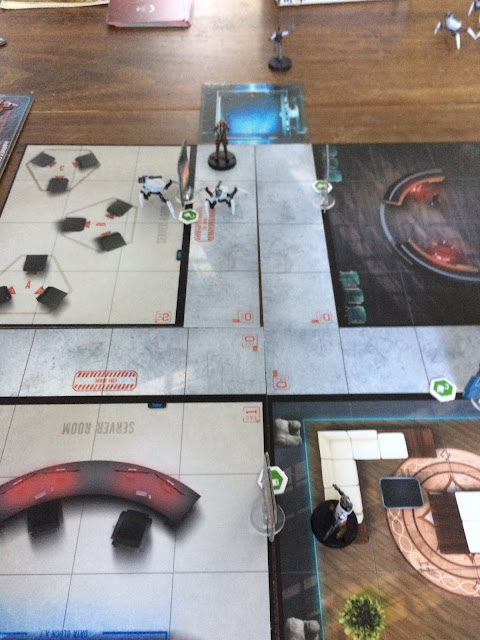 Turn Two:
Tomo located the Server Tower and waited for an all clear from Harvey. Harvey danced around some drones skillfully slicing them to ribbons. It seemed as fast as he eliminated drones, more would advance down the corridor attempting to block access to the Server Tower. Harvey took some slight damage to his cybernetically enhanced legs from Drone gunfire. 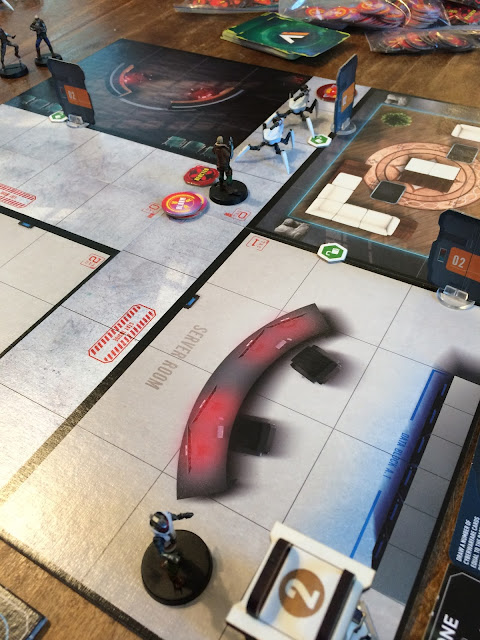 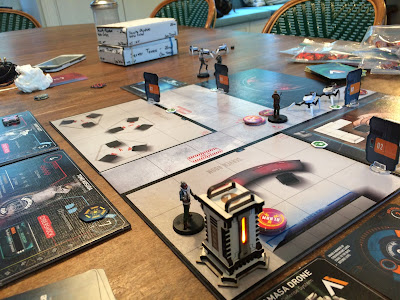 As the system glitched, Harvey finished off the drones. Alarms and flashing lights...

Harvey and Tomo infiltrated further into the building for their second mission...as the AI system became unstable and then shrugged off its controls becoming self aware.

Scenario Two should follow soon...it pits the Nakamura CEO's assistant and bodyguard against the rising AI. They must  attempt to determine the extent of the threat and halt the nascent threat of an unrestrained and armed AI...

Stay tuned.
Posted by Mark Ryan at 4:04 PM No comments: