Ganesha Games announced today to celebrate Italy's decision not to build any more nuclear power plants today, the PDF edition of Mutants and Death Ray Guns will be available at half price until Sunday (June 19th). That means you can get the game at $4 USD a pop. Ganesha will refund $4 via paypal on every order which includes MDRG.

I played a series of these games last year. The games are fast and fun. The game-verse is that of Gamma World or Thundarr the Barbarian rather than Mad Max or The Road. The only reason I have not played more is that I am trying to work through my collections and give each set a play. It is definitely on the list for more play. I'd also like to try a campaign as the rules come with a simple campaign system.

So if you ever thought to play this genre or are a pdf collector go here (ganeshagames.net) and pick one up.

We played a game of Fear & Faith yesterday. The villains were werewolves and vampires competing for the ownership of four human cattle. We used Blue Moon and Deadlands figures. The scenario was structured as a werewolf raid on the vampire castle to "save" the human cattle. All in all, a great idea and a balanced scenario but I can't say I was much enamored of the monsters fighting each other. Neither side had missile weapons. Lots of chasing each other around as the Fear checks caused your melee target to run. It was an ok game, but I have never been a fan of the monster vs. monster movie...Fear and Faith really shines when it is Evil versus Good. I snapped some photos on my iPhone. 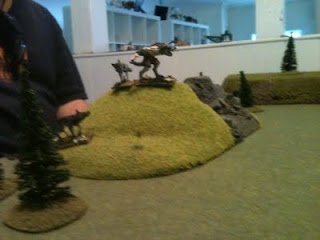 Wolfen approach stealthily...but that moon is too beautiful not to howl 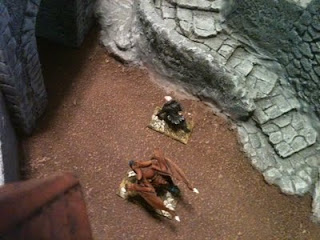 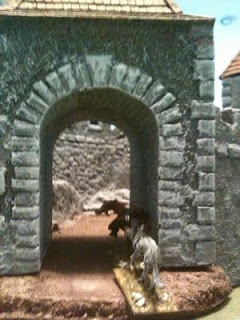 There's something in there... 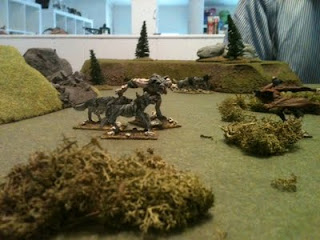 Advance to contact!
I think I interested two buddies in trying out some 7TV. They went away with the ideas percolating for their show. I told them to come up with the theme, the bad guys, good guys, etc. and I would stat it up. I suspect it will be some Cold War espionage show.
Next up, we started to plan Black Powder. My French Rev, ACW, SYW, League of Augsberg, and Carlist War collections are almost there; but would not give the best four player Black Powder game. In the past I always collected for slightly smaller games than a "typical" or "recommended" BP scenario. One of my friends stepped into the breach and offered to provide the ACW troops if I planned the game. He says he has enough to play Bull Run--a personal goal for me to play by the150th anniversary.

Planning finished, we looked for a filler game on my shelves. IT was a toss up between Doom and Castle Ravenloft. The decision was made no easier by presentation as I have painted both sets. The decision went to the new as one guy had never played Castle Ravenloft, a great game. It's cooperative dungeon crawl boardgame based on a simplified 4th edition D&D. Our party (a ranger, cleric, thief and wizard) was tasked with recovering an icon from a chapel deep in the dungeons. It was a near-run thing with the cleric and ranger going down in the final battle. The thief backtabbed a big bad and snatched the icon (saving all of our lives with a healing surge) while the wizard blasted the last of the baddies. It was great fun. Good game if you like cooperative dungeon crawls. It also helped that I had painted figures for all of the monsters and characters. The only thing that would have made it better was to use the Dwarven forge figures; but that wool require some preplanning and we only decided to play it after the F&F game was over.
Posted by Mark Ryan at 11:54 AM No comments: